A Gap in the Jungle by Rog Thomas 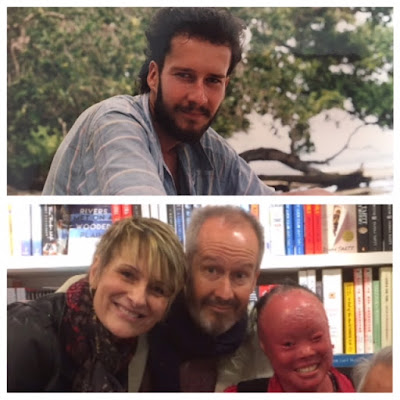 AUTHOR’S NOTE
These are the recollections of a Generation X-er starting a “gap year” in Papua New Guinea (PNG) which led to the adoption of an abandoned baby girl born with a rare skin disorder that society chose to reject (The Girl Behind The Face).

Standing next to an anthropologist and a Swede with all my clothes off is a new experience for me.
The anthropologist suggests I take them off. I’m hot, it’s midnight, I’m in the middle of a tropical jungle. I get undressed. The anthropologist and the Swede take all their clothes off, too. This culminates in an outbreak of almost intolerably excessive shrieking by some thirty women and children.
Being laughed at in a tropical jungle by some thirty women and children with all my clothes off is another new experience for me.
Some weeks earlier I was fully clothed and listless in London. Now, I’m naked, hopping around and waving my arms about in a jungle in Papua New Guinea frantic no mosquito should bite me on the...

“I grew up in the shadow of Ernesto. I could never escape it.”
Che Guevara’s brother, Juan Martin

On the road to Gapun Village:
London to Wewak – Call me Tim… Wewak to Angoram – Big Brother suggests…

Some thirty years ago, at a desk in London, I telephone my brother. My brother is in Papua New Guinea. The call is short.
With a long habit of knowing exactly what to do, Big Brother tells me to visit Papua New Guinea. He calls it a Gap Year.
I leave my job a short while later.
I grew up in the shadow of Big Brother. I could never escape it. His story is pretty remarkable.
This is not his story.
Some few weeks later, I board an airplane to Wewak, Papua New Guinea and do so like I would a bus to an unremarkable district of London.
Eight thousand five hundred miles. Eight thousand five hundred years. It could be the past; it could be the future. Stone Age world; Brave New World; O brave new world. There’s more than a single story. PNG is more than “grass skirts and cannibals”.
I arrive. And it’s like I’ve walked straight off a cliff.
I was never aware of how strange my life was when one day was much like another.
The air is wet. Colours startle. Plant life is iridescent. To my toes, I’m tingling sensations.
The heat is calamitous.
Some few days later, in Wewak, Big Brother tells me to visit an anthropologist in a remote jungle village called, Gapun. He hands me a scribbled note: the address of someone who, he thinks, will help me. I stare at the note: an address in a town called Angoram. ‘Is the town easy to get to?’ I ask.
‘About a hundred kilometres by PMV,’ he says, then adds, ‘the road ends there,’ as if to make everything perfectly clear. Big Brother’s tone is very matter-of-fact. He sounds confident.
PMV…? The road ends there…! I repeat to myself. But I assume I should be confident too, so I crinkle my forehead in earnest and acknowledge with a nod. ‘It’s near the village I’m heading to?’ I ask.
‘Two days travel on the Sepik.’
I crinkle and nod. Names roll in; names roll out. Like the rush of water across a pebble beach. Rarely do names stay long.
‘Hitch a ride in a dugout,’ says my brother.
‘A dugout?’ I ask, forehead still crinkled.
‘A dugout canoe,’ he says. ‘One goes to Marienberg every Thursday.’ He turns away.
Every Thursday… Marienberg… Alone, my crinkle turns into a frown. I’m confused. Then worried. Then suddenly I chuckle, which somehow always helps, and my shoulders twitch as if I’ve just heard a witty retort: my way to stay in control when everything’s out of control. Having pulled myself together, I stuff a small knapsack to be slung over one shoulder with a t-shirt, shorts, and a carton of cigarettes. My brother’s told me to give the cigarettes away.
Big Brother drives me to the side of an unsealed road on the outskirts of town. A large open-back truck is idling. The truck is the PMV. The transport.
The heat remains calamitous.
Black babies with blond hair, held by black mothers with black hair, burst into tears when they see my white face and black hair. The mothers smile and laugh. I smile and laugh. A black boy in a white school uniform tells me the babies cry when they see a white man. We both smile and laugh.
Big Brother tells me to climb into the back of the open-back truck. I climb in. No seats, no benches. He offers a reassuring nod. I nod back. He sprints off. I stare. My forehead is crinkled in doubt. He sprints back. He hands me a huge branch of betel nuts that is so much too big for my small bag. He calls the betel nuts, buai. He tells me to give buai away. My forehead is crinkled in earnest. I continue to acknowledge with nods.
I sit on the floor of the truck. The truck fills with men. It rumbles off.
Sat with my bag between my knees on a rough plank floor, I clutch the buai branch to my chest. The truck bounces calamitously along the rocky road. I bounce calamitously on the rough plank floor. The truck belches out diesel fumes and churns up lungfuls of dust. Twenty strange men with ferocious and bearded faces and teeth blood-red from buai bounce around me in the truck. I smile. They smile back. I give away buai and cigarettes.
Sometime later it begins to rain, and the diesel and dust turn to foul-smelling mud.
I pull a khaki cotton bucket hat from my bag.
Nauseous and spattered with great gobs of foul-smelling mud and surrounded by several more men with ferocious and bearded faces and teeth blood-red from buai to whom I give away buai and cigarettes, I put my head on my bag and sleep.
While the truck and the men continue to bounce calamitously, I dream I’m on a steamboat in a storm in Africa.
I awake in the Heart of Darkness: Angoram.

In the darkness, the open-back truck shudders to a halt. The engine throbs. Rain falls monotonously. Insects chirp monotonously. I wipe foul-smelling mud from my face.
‘Angoram?’
The men around me acknowledge with nods, and wet beards glisten in the pale glow of light from the cab of the truck. A thousand insects twinkle and fizz in the glow.
I shoulder my bag. Others and I clamber from the truck.
Under a moonless night in the small town, starless and Bible-black as Under Milk Wood, I might think to move nervously and fast. I don’t think.
Men slope off, voices fade, the truck rumbles away. The Bible-black night swallows the lot.
I pick a tune at random to hum; I pick a direction at random to walk. The tune bombilates inside my head as I head off.
Clutching my buai and cigarettes and scribbled someone-will-help-me note, I wonder out loud where I’ll sleep: ‘… could sleep in a ditch over there? Hmm… there might be spiders? Don’t like spiders. Hmm… wonder if New Guinea's got tarantulas? Hmm… maybe I can walk up and down till morning?’
Talking to myself keeps me calm, but I chuckle as it’s also disturbing! Pickled in foul-smelling mud, I trudge on like a sniggering madman.
Ahead, a fire spits orange sparks beneath a crude tin-sheet shelter. Like a moth, I'm drawn to its glow. A young fellow and his friend glow ebony-orange. They smoke and stare and chew. The young fellow spits red buai beneath the crude tin-sheet shelter.
‘Excuse me!’ I say and approach like a tourist in London. I show them my someone-will-help-me note. They smile with teeth blood-red from buai and nod. The young fellow points over his shoulder.
I feel sure he can’t possibly know. He can’t. I’m utterly lost. Then I chuckle and shrug and give away buai and cigarettes. I tramp on as directed, into the forest.
I’ve nothing to say, but I notice I’m talking aloud.
The forest talks back in whispers and chatterings and hoots.

I was strangely cocksure of everything that night.
HEART OF DARKNESS by Joseph Conrad

Rain falls. Insects chirp. Time passes. The forest is dense and wet.
Rain runs off my nose. Foul-smelling mud fouls my nose. Foul, wet clothes cling to my back and my chest and my legs. I cling to my someone-will-help-me note.
Like a stray dog in a storm in a doorway, I stand in starless, moonless darkness at the...

Please contact for a copy of the book. And please leave a comment below and share with friends, if you've enjoyed what you've read. Thanks, Rog.